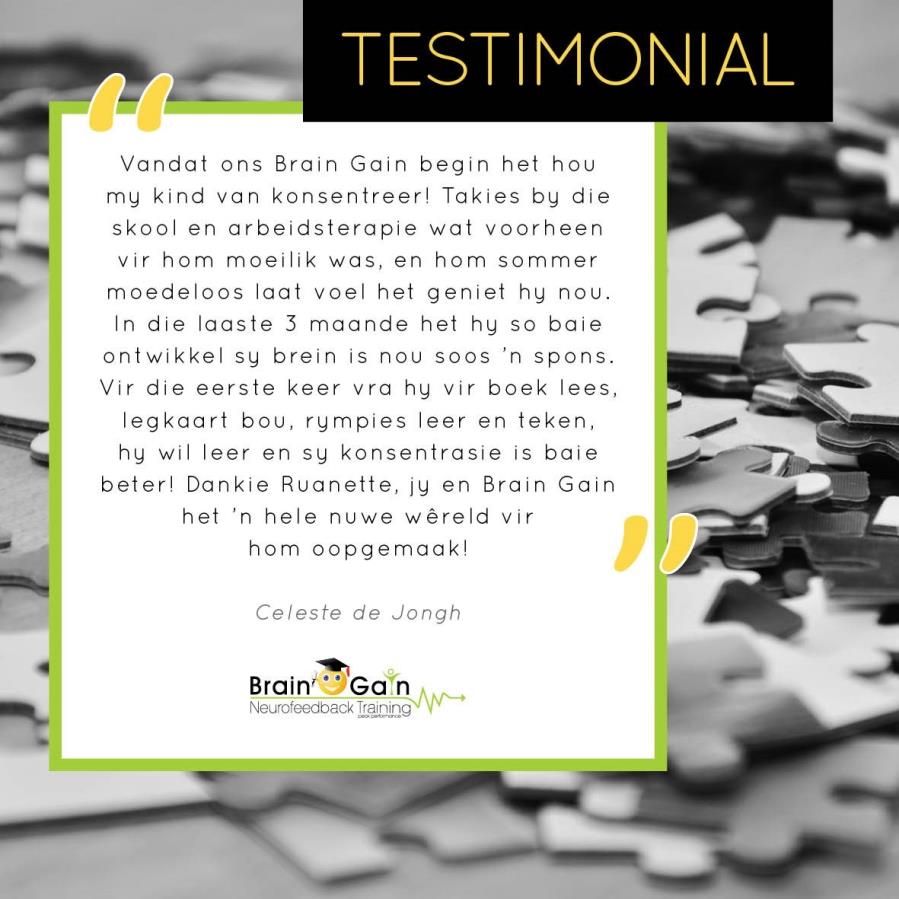 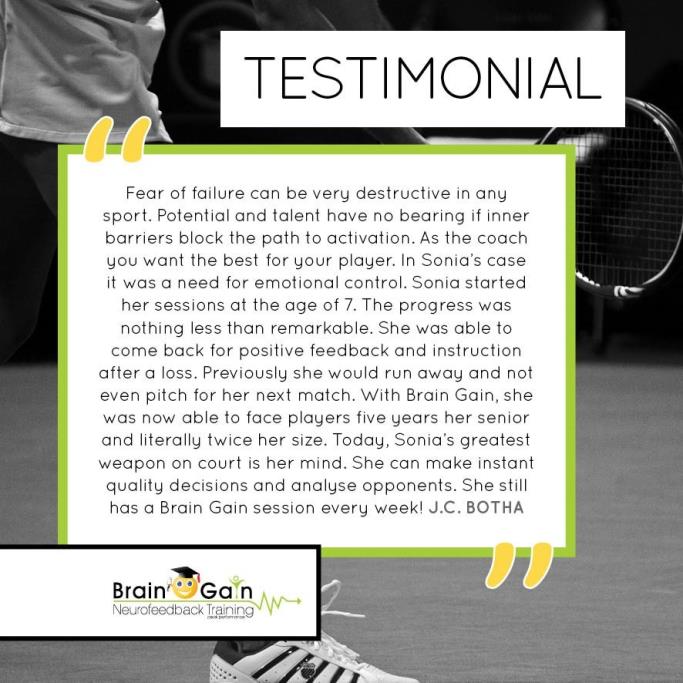 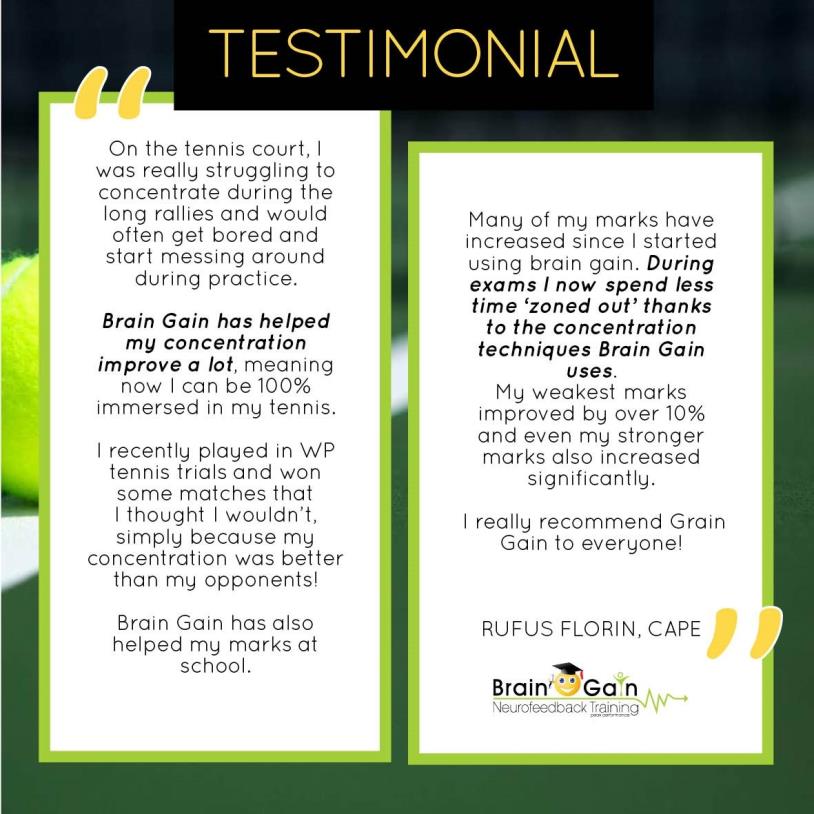 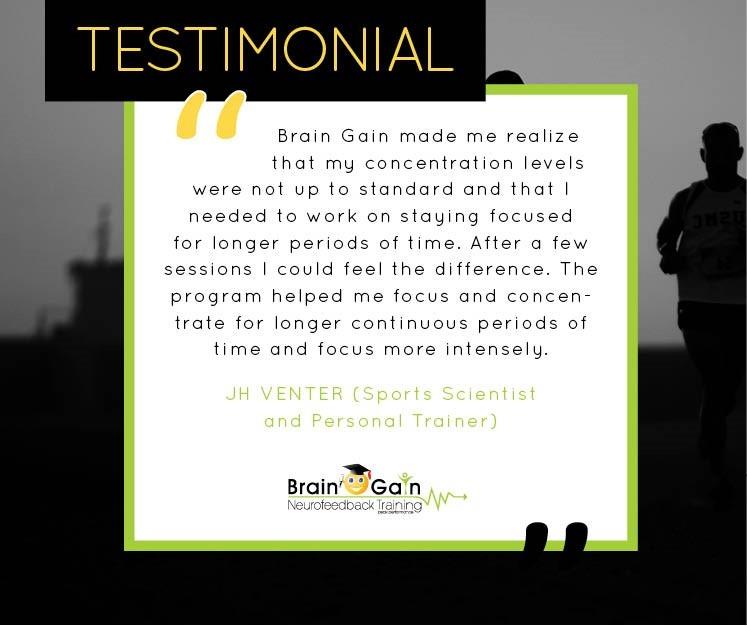 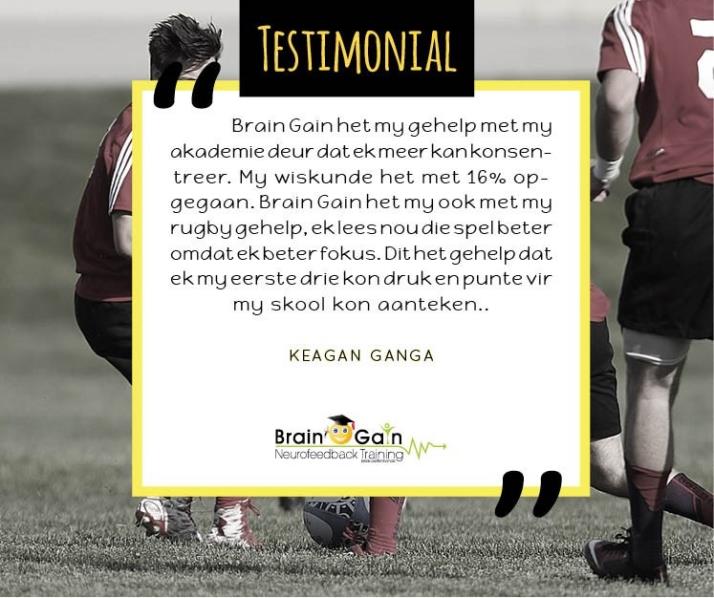 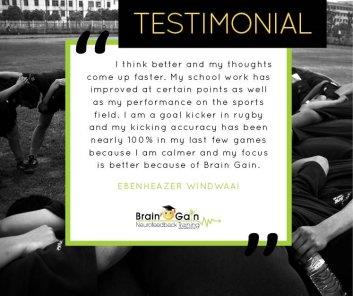 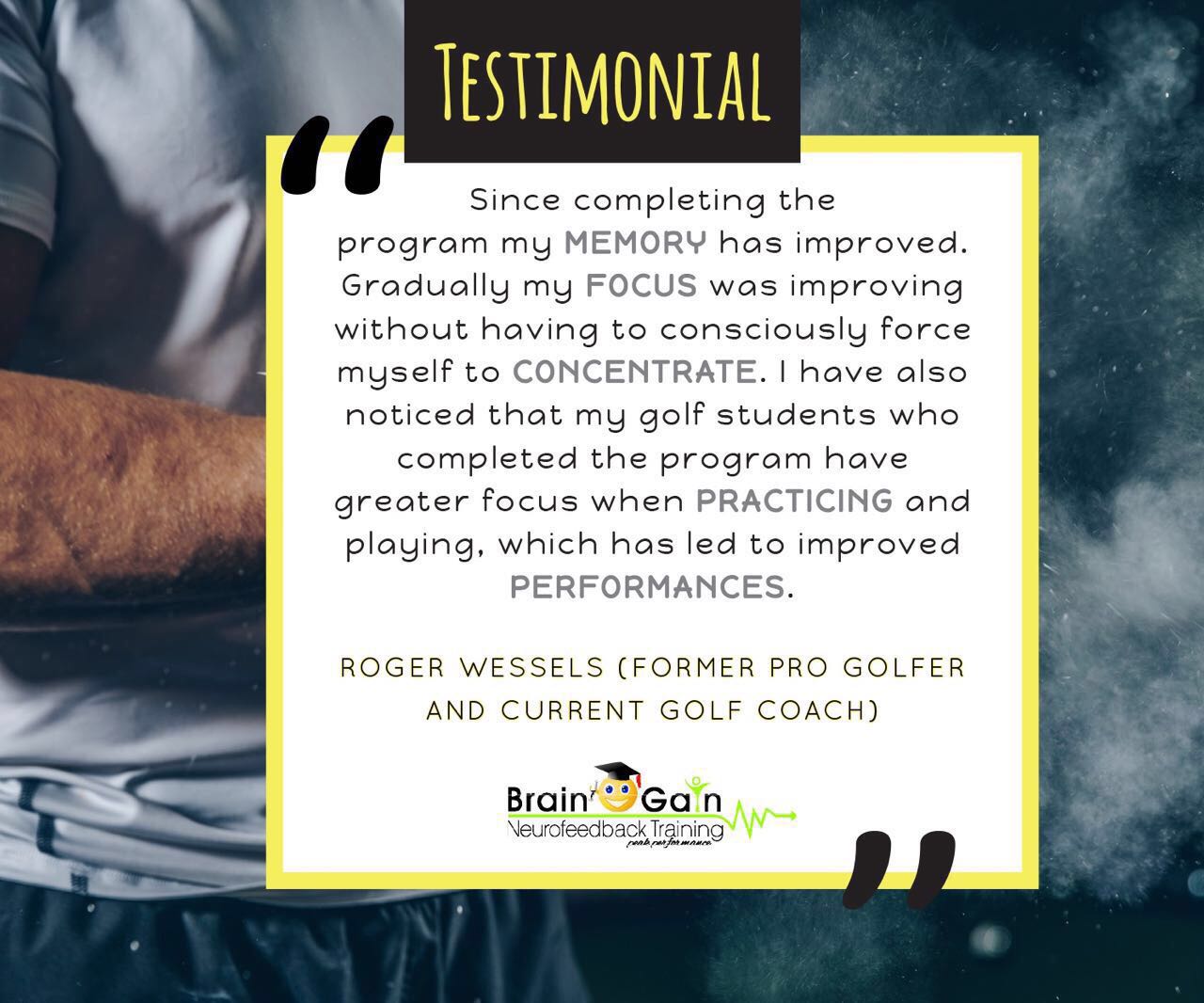 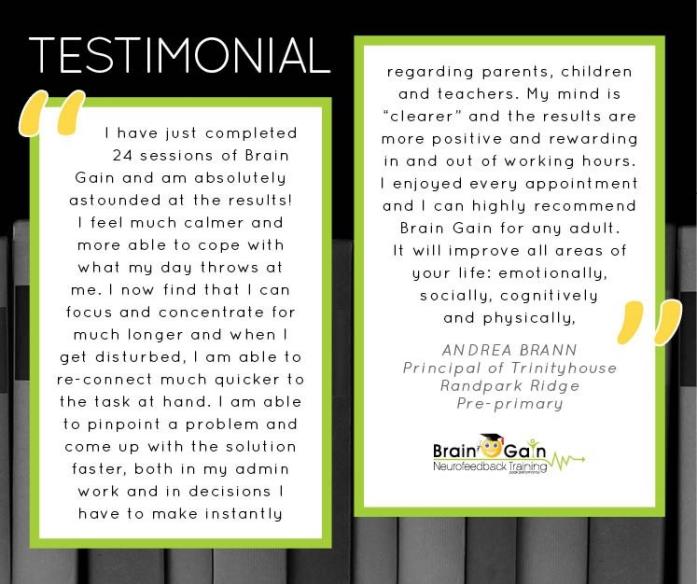 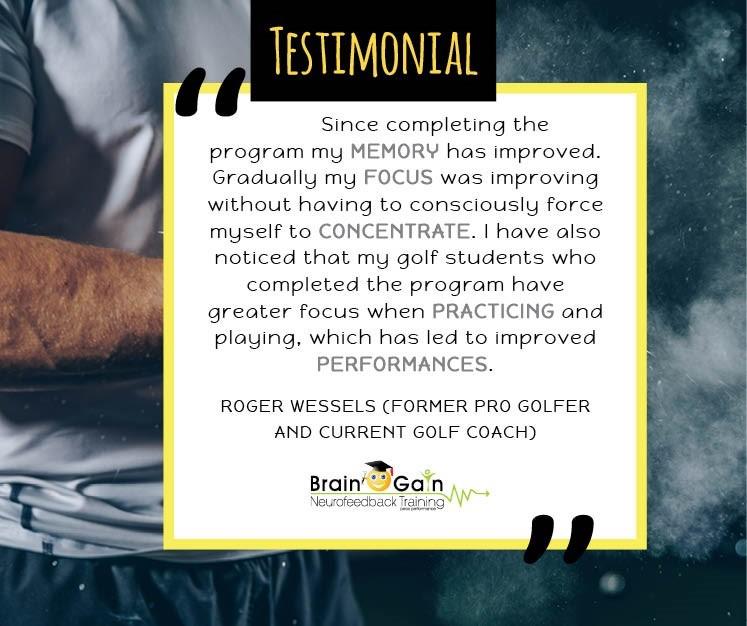 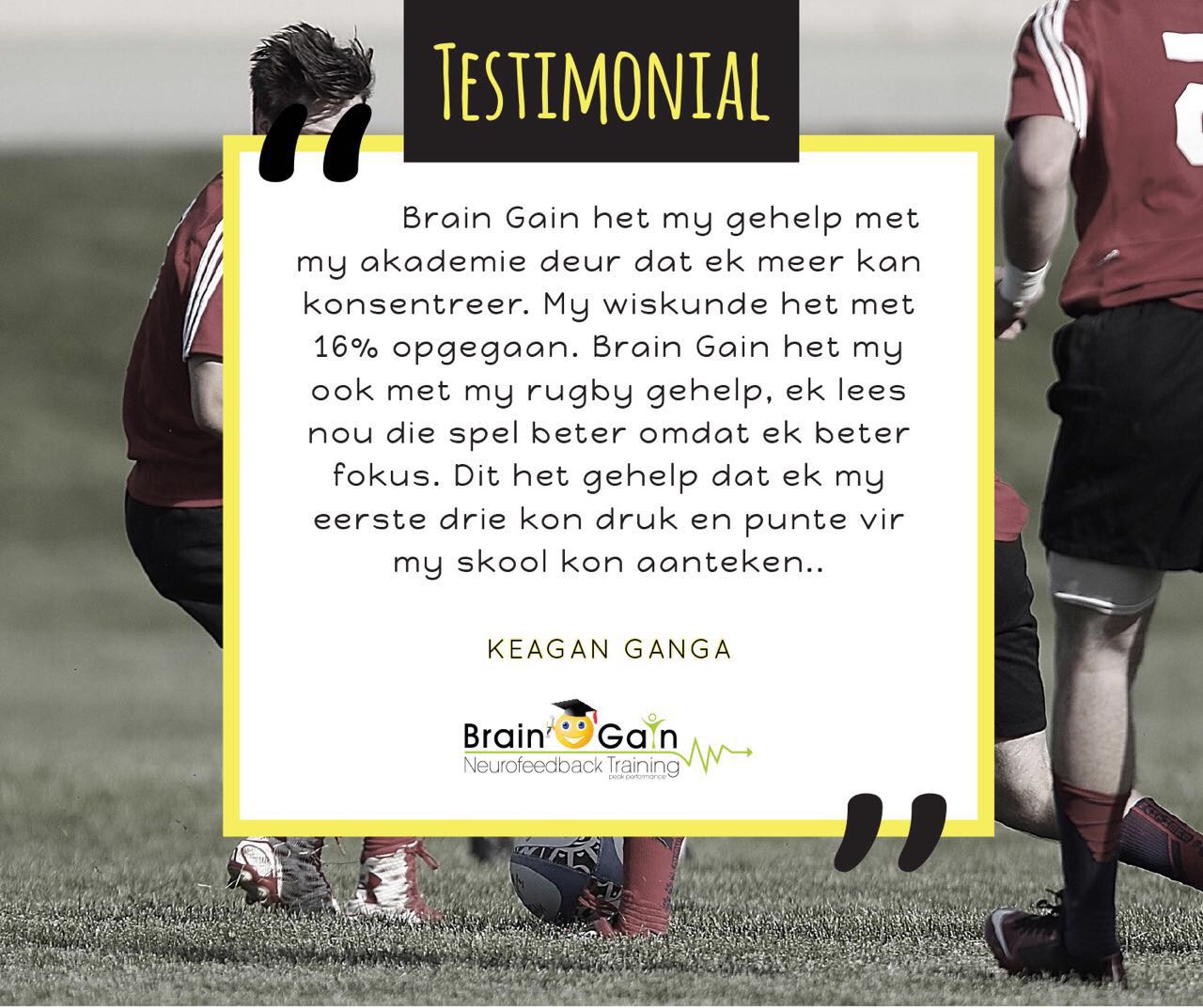 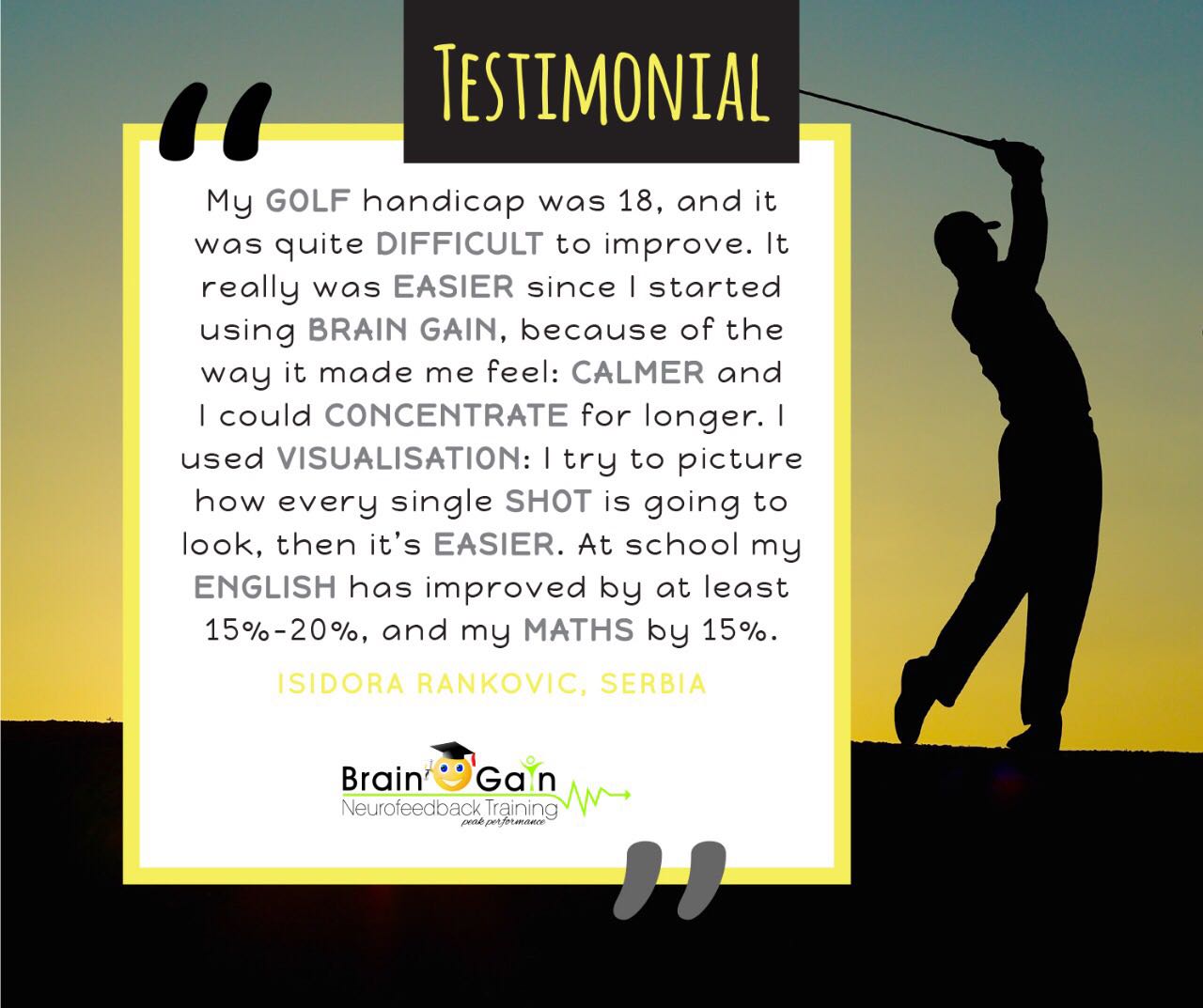 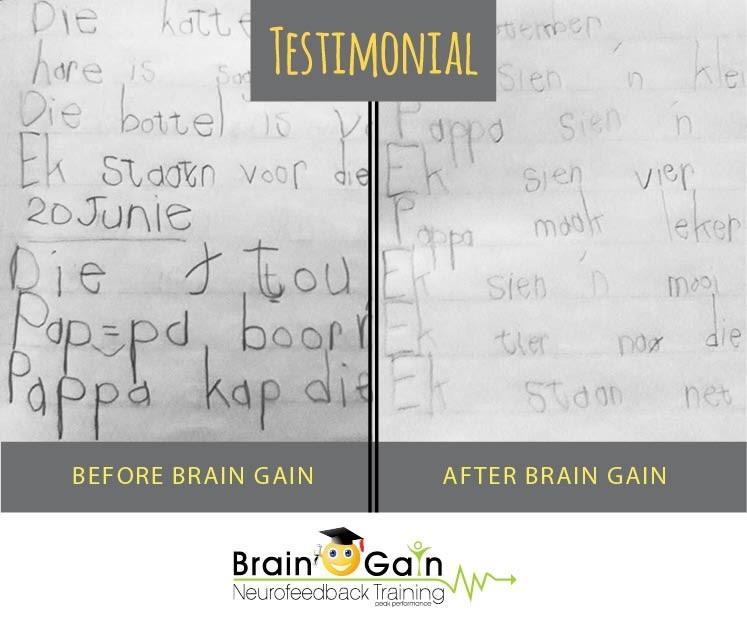 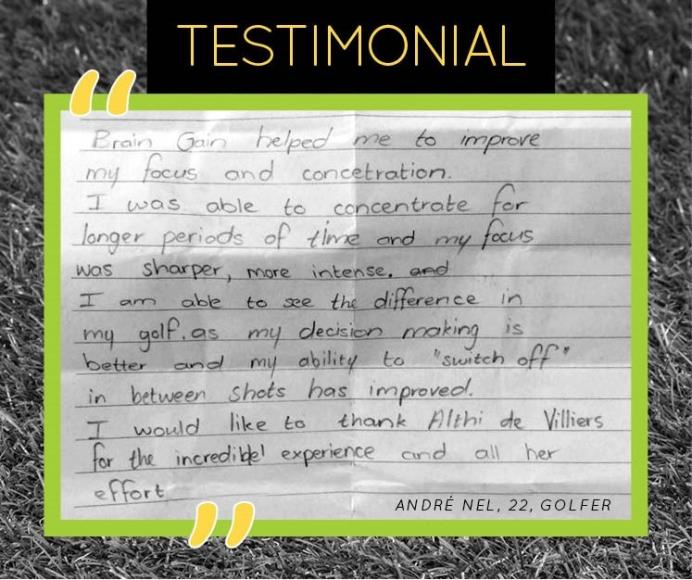 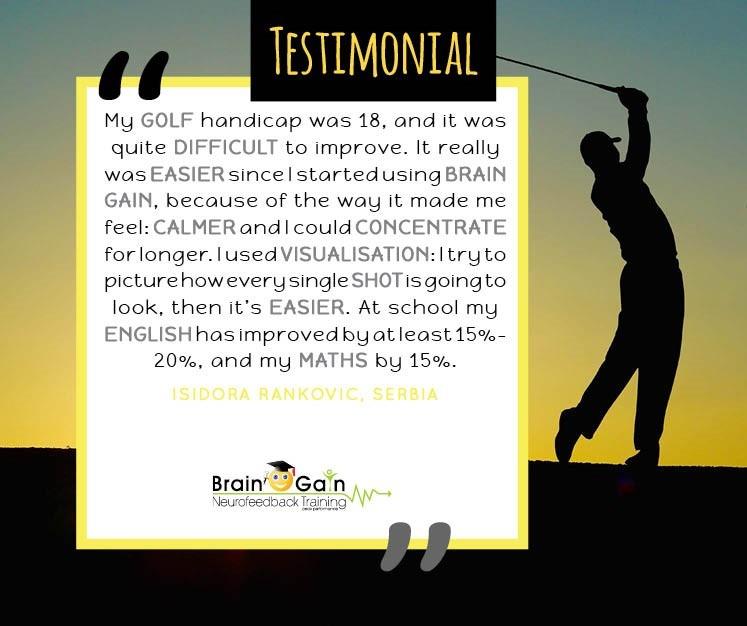 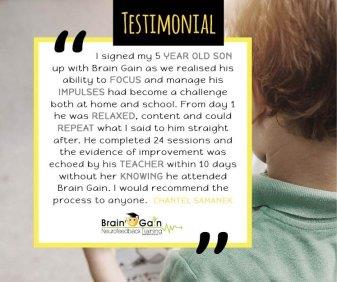 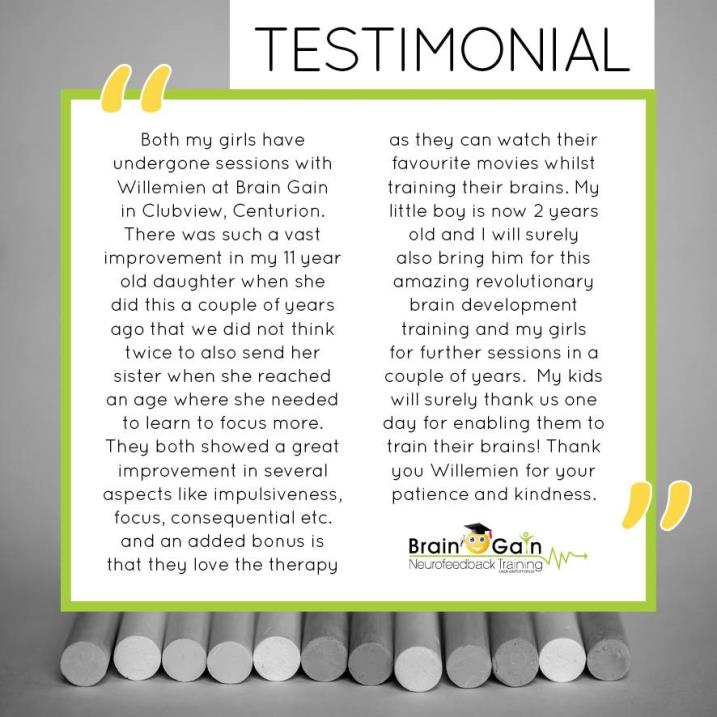 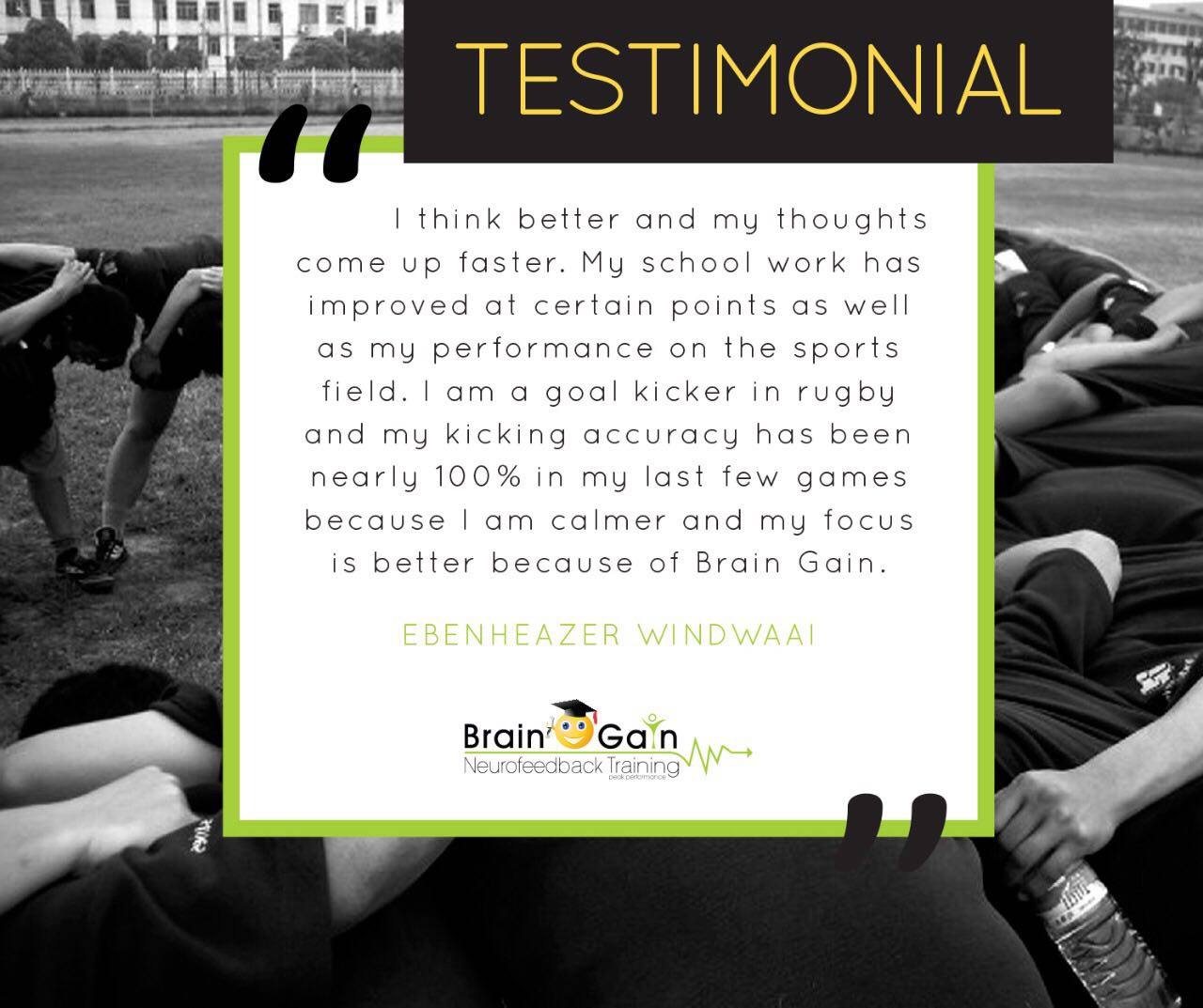 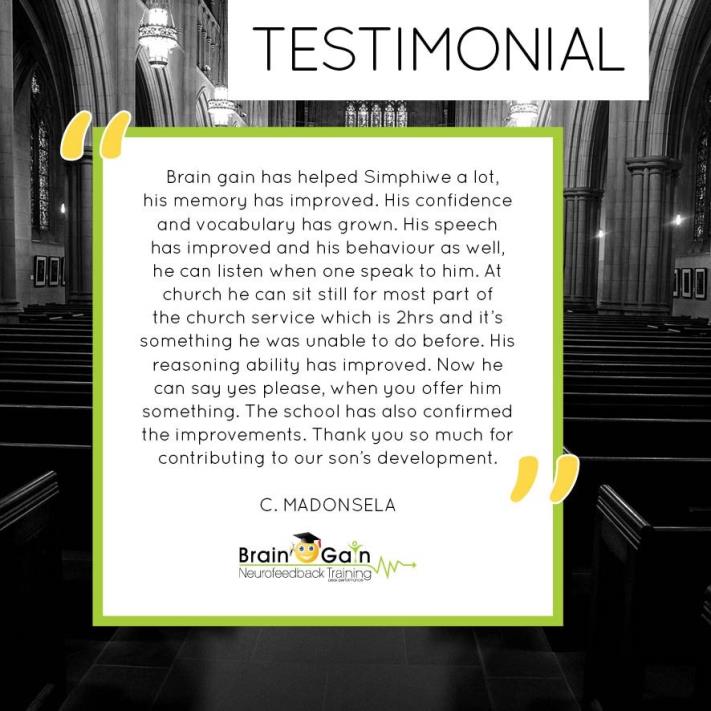 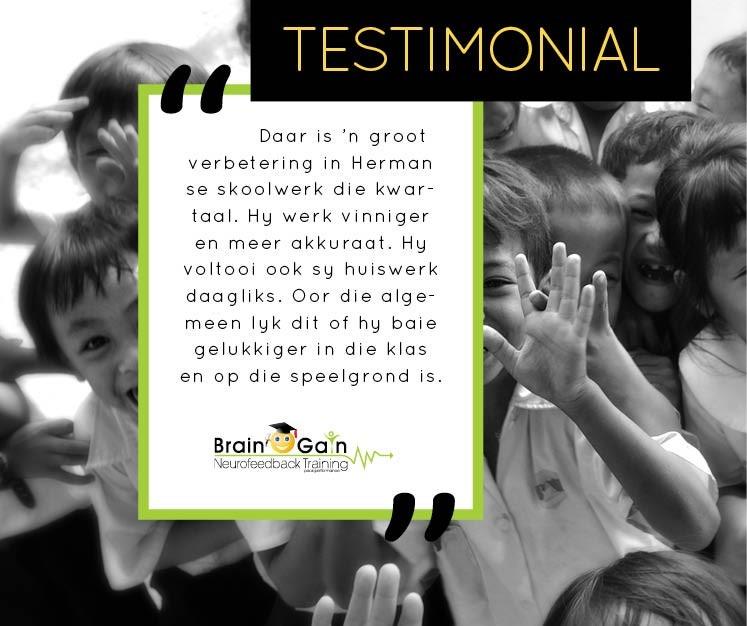 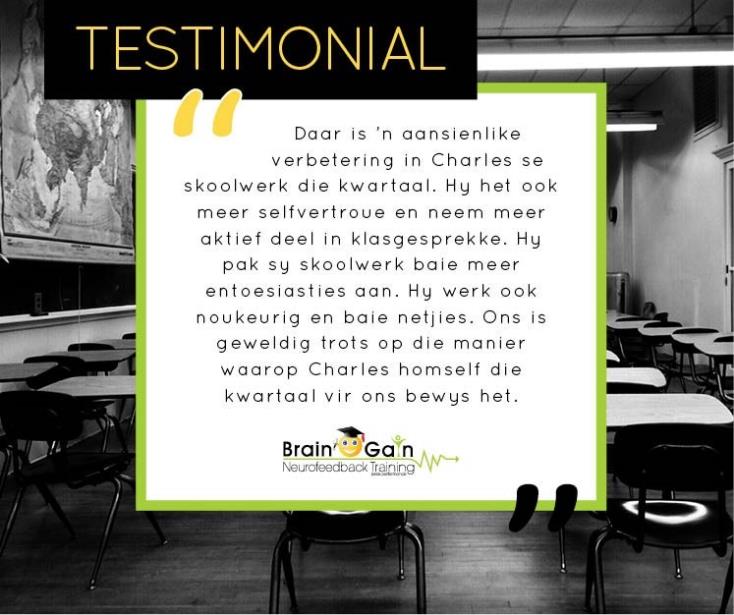 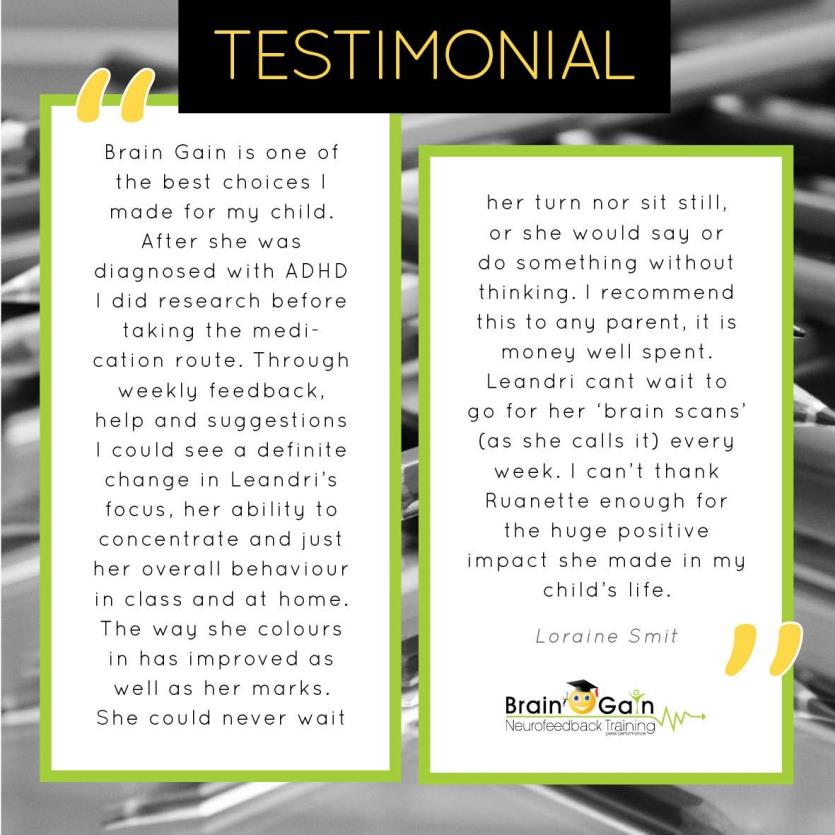 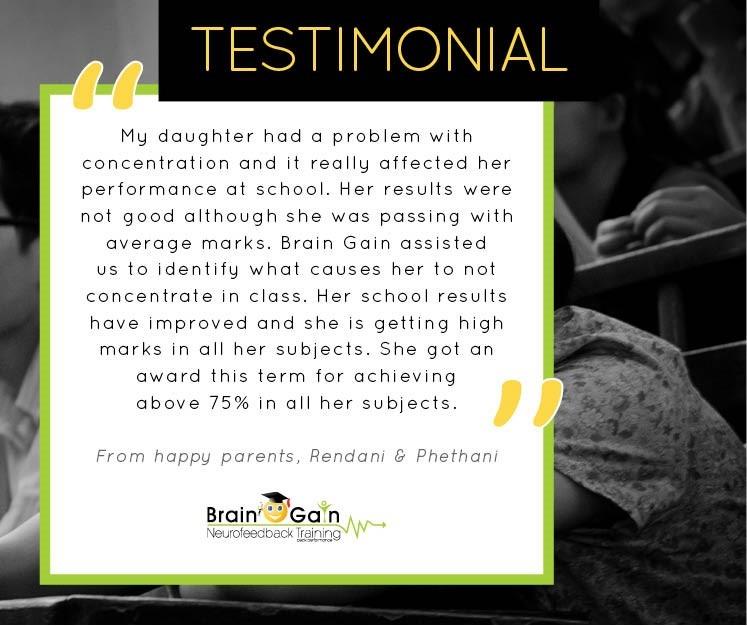 “My daughter, is an avid golfer, but she used to struggle to focus through a one hour session as well as lessons. Even at school she had times where she would struggle to stay on task. After she attended a few sessions of brain gain I could see a noticeable difference in the amount of time she could stay on task. Even her piano teacher noticed a difference and was delighted that her focus stretched for a full hour. I am a big sceptic when it comes to programs like this, but the results speaks for itself. My daughter did gain the ability to focus and stay in task for the amount of time she needs to finish a set task and it made a difference in her school work and her sporting endeavours.”

I signed my 5 year old son up with Brain Gain as we realised his ability to focus and manage his impulses has become a challenge both at home and school. Although many say that those are the normal traits of a 5 year old, I wanted him to have the ‘tools’ to increase his ability to focus faster and manage his impulses when it matters. I knew the training worked from day 1, as he was relaxed, content and could repeat what I said to him straight after. He completed 24 sessions and the evidence of improvement was echoed by his teacher within 10 days without her even knowing he attended Brain Gain. On top of that, Maureen Jacobs is the perfect facilitator; she truly cares and wants to help facilitate a lasting change. I would recommend the process to anyone.

“My son Jack was diagnosed with ADHD in 2012 (Grade 2). His concentration levels were very low, resulting in impulsive and disruptive behaviour. His reading skills level was also well below the norm, and his confidence and self-esteem were very low. As a family we opted for Brain Gain over Ritalin, which was reinforced by the feedback of the first TESCA – Jack is not a candidate for medication. After having gone through the recommended sessions, Jack has shown a huge improvement in concentration, his behaviour has modified and his self-esteem and confidence levels are up. From a child achieving 2’s and 3’s in 2012, he has achieved 4’s, 5’s and 6’s in the 1st term of 2013. His reading skills have dramatically improved as well. I would highly recommend Brain Gain as an alternative or supportive treatment for kids with ADHD!”